This Idea Is Not Working

I found the video for this lesson while looking for stuff to interest an in-company class at the end of term. They’ve just sat the FCE and have been subjected to months of gapfills, sentence transformations and formulaic conversations. I decided to use the video to allow them to explore their creative sides, and the creative side of their jobs. It could equally well be used as a storytelling lesson for kids or as a review of structures for evaluating past actions for Trinity GESE Grade 9.

Lesson: This Idea Is Not Working

Language focus: All narrative tenses (including present simple); verbs of action and transformation; modal verbs and other structures for evaluating past actions; discussing advantages and disadvantages

Draw a line on the board. At one end write ‘wonderfully creative’. At the other, ‘mind-numbingly repetitive’. Clarify the modifying adverb in the latter example if necessary, then mark an X at the point in the line which represents how you feel about your job. Explain why you put your X there then invite your students to mark their own Xs and explain their reasoning. (With kids or teens, this could easily be made about school rather than employment).

Tell the class they’re going to watch a short film about someone who needs to be wonderfully creative. Ask them to watch and be ready to explain the basic story at the end.  Click on the video above or go to the link below (where you can save the video for later by copying the link and pasting it into www.keepvid.com or similar).

THIS IDEA IS NOT WORKING from Henrique Barone on Vimeo.

A cartoonist/storyteller is trying to create a story out of various characters and scenes but fails to do so because nothing works. No parts of the story connect in a meaningful way. The film is about the creative process being blocked, or about creativity getting out of control.

Original line-up of characters for This Idea is Not Working, from Henrique Barone’s blog

Recall the cast of characters and objects with the students and get them on the board.

Characters: the narrator/cartoonist, a musician, an old lady, a giant robot, a snake, an evil genius, a king and a queen

Objects: a motorised wheelchair, some coins, a coffee, a lift, a top-hat, various musical instruments

Get the students into pairs to try to recall how the characters and objects relate to each other throughout the film. Take some brief feedback then watch the clip again to check or build on their answers. Clarify any vocab: the focus here is on action verbs and verbs of transformation both in the active and passive voice. If the students don’t produce the present simple spontaneously, you can point out that it’s the natural tense for recounting the plots (however chaotic) of films, novels, short stories and plays.

You may need to replay the video as there is a lot of action to think about.

The musician plays the various instruments and is terrible, until the end, The old lady inserts coins into the robot, then gets stamped on. However, she falls in love with him. She spends the rest of the film chasing a coin for no reason. The top hat transports objects from one place to another. The snake is transformed into an evil genius.* The king and queen battle each other at first then unite against the evil genius, but are unable to catch him as the motorised wheelchair is too slow.

*Choice between active and passive here implies a different interpretation of the agent of the action.

Finally, discuss what happens at the end of the film with your students. Basically, the narrator calls for a ‘plot twist’. Explain what this means then elicit what happens. Play the clip from about 3.28 to jog memories if necessary. The narrator asks, “What if evil wins?” The evil genius soars into the sky, a flying flute decapitates the narrator and deposits his head onto the genius, the genius dives onto the musician, and the three merge into a rock guitarist (this time a good one). The old lady falls in love with him, and the narrator finally seems pleased with his idea.

This version of the lesson might suit kids better, but I don’t see any reason why adults wouldn’t enjoy it either.

Simply task the students to write, in pairs or threes, a ‘meaningful’ version of the story using the same cast of characters and objects. The story should have a beginning, middle and an end, and a concrete location. They could add drawings if they wish. It could even be a storyboard like the one below, albeit less detailed: 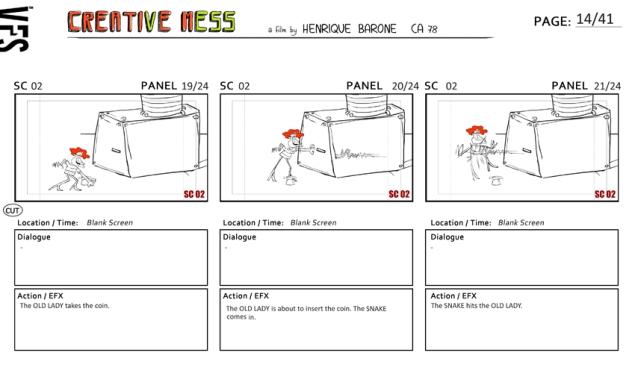 Original storyboard for This Idea Is Not Working, from Henrique Barone’s blog

Using a storyboard or a conventional script with dialogue and stage directions means you can continue with the present simple. Or, if written as a traditional short story, the past narrative tenses could be practised. In any case, encourage the recycling of verbs and other phrases from the listening/watching stage.

As ever, encourage peer-reading and peer-correction and feed back on content and language use.

We’ve noted that the narrator seems pretty pleased with his last idea. But, if this writer had been your employee at some cutting edge animation company, and had been tasked to come up with a hit story in the traditional mode, would you be so pleased with him? You wanted a creative story, not a story about creativity, wonderful though it may be!

Barone at work, from his blog

Clarify this by writing the following questions on the board:

The first answer I got was ‘He should go for a walk to get some fresh air’. I boarded this then we reformulated it with reference to the grammar of the question, pointing out that we’re talking about something in the past. Then I elicited or modelled different ways of saying the same thing.

1 He should’ve gone for a walk.

2 He could’ve gone for a walk.

4 He might’ve thought about going for a walk.

5 He’d have been better off going for a walk.

Concept-check by asking which structures are used to say what was possible in the past (2, 4), what was a good idea but wasn’t followed (1, 5) and finally, what was impossible or purely hypothetical, i.e. what wasn’t said or done because a certain condition wasn’t met (3; clarify by adding ‘If I had been his boss’ or ‘If I were him’ and reviewing the 3rd or mixed conditional). Clarify that all these phrases are used to review or evaluate actions in the past. Then drill, focusing on stresing the content words and clipping the weaker or contracted syllables.

Now pair up your students and get them to carry on evaluating. As the discussion continues, remove the phrases from the board or ask them to cover their notes to move the focus from accuracy to fluency. Feed back on content and structure.

He should’ve started with the story, not the characters. He shouldn’t have used such one-dimensional characters. He could’ve discussed it with colleagues.  I would’ve told him to go home and chill out. He might’ve been better off smoking some weed before starting.

Yes, one of my students did suggest this last answer. I had to point out that this was possibly the cartoonist’s initial problem.

From here it’s possible to segue into Jamie Keddie’s fine lesson on creative thinking and motivation, The Candle Problem, which utilises a psychology experiment and a Ted video for some discussion and listening practice. As this lesson lasts around 30 minutes, with added homework, it fits nicely into a 90 minute lesson.

I started by asking the students if they felt the introduction of positive incentives (e.g. extra money) or negative incentives (e.g. less money) would’ve made the cartoonist more or less likely to produce a conventional story. From there you can introduce the concept of ‘the carrot and the stick’ and Jamie’s lesson follows on nicely from there. 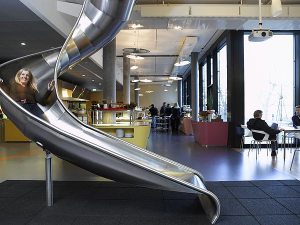 Remind the students of what they said about the creativity (or lack of it) of their jobs. What could their company do to help them be more creative? Are they allowed or encouraged to do the things suggested in Stage 3 (Option 2)? Could any changes to the environment help them?

Show some images, like the above, from a workplace designed to promote or facilitate creativity. Here are a couple of links to images of Google offices around the world:

Ask in each case why they think the office or space was designed like that, and what advantages and disadvantages that might have. Would this work in their company? I was surprised to find my group of engineers and IT technicians – who had all identified a healthy amount of creativity in their jobs – rejecting most of the ideas. Eventually, there was grudging acceptance of the notion of a ping-pong or futbolín area, although some pointed out that part of what they enjoy about these activities is the fact that they are completely separate from their working lives.

Some ideas, after all, are just not working.

It may interest your students to know that Henrique Barone, far from being anyone who would get in trouble for his creativity, was still a student when he made this film. There’s a nice blog about the process of making it here.