Lessons with Maps 1: Professor Puke and the Follies of Youtube Caption Creator

I have recently become obsessed with maps of different kinds. Couple this with the recent discovery of a neat trick you can do with Youtube clips,* and there you have it.

*If you want only this and can’t be bothered with the rest of it, go directly to step 10.

1. Chat to your students about their favourite subjects at school. Find out if anyone liked geography. I did – and a love of maps was at the heart of it.

2. Flash up the first of the two images below and ask the students if this map seems right or not. It should do. Then display the second one. Is anyone familiar with it? Fewer people will be, most likely. If anyone does know what it is, ask them to keep quiet about it for now. Elicit a couple of obvious differences that the students have spotted. 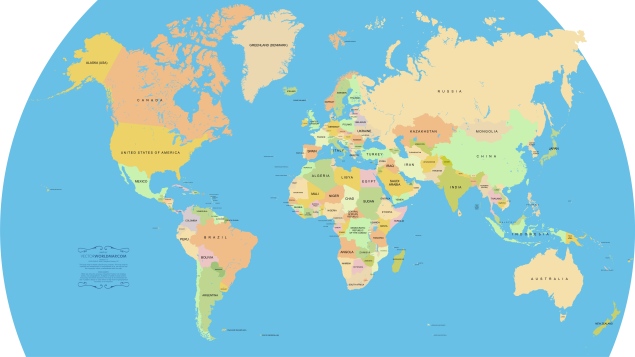 3. Explain that they are going to look for more differences. Display the images again, for a bit longer this time, then conceal them. Ss should discuss in pairs what the differences were. Listen out for how they frame their comparisons for feedback.

The relative sizes of the countries and continents are quite different

4. Find out if anyone knows anything about the origins of these maps. If not, tell the Ss that the first map is based on the Mercator projection, and the second the Peters projection. Say that Mercator and Peters are people’s names – elicit that their field is cartography and that they are cartographers. Ask the Ss which map they think is older (the Mercator one), and which purports to show the nations in their true size and proportion (the Peters). Which one were they accustomed to at school? (The Mercator, I imagine).

5. Explain that they’re going to watch a clip from the TV series The West Wing. In this clip, a group of cartographers show the two different maps to CJ Cregg and Josh Lyman, who both work for the President of the USA. Ask them to listen for the following information and play the clip through once:

They propose that the Peters Projection replace the Mercator in schools in America. They also propose turning the map upside down.

Cregg and Lyman’s reactions range from surprised and intrigued to disinterested, astounded and finally ‘freaked out’.

6. To see what else the Ss got from this first viewing, hand out the following sentences to pairs, cut up or otherwise disordered, and see how far they reconstruct what happened. Here they are in the correct order:

7. Tell the Ss they are going to view the clip a second time, but this time they should look less at the screen and instead focus on two tasks: a) checking their sentences are in the correct order; and b) taking additional notes to get some details under each of the following headings, which you should write up on the board:

8. Play the clip again and allow the Ss time to check their notes together in pairs before taking feedback. Check any potentially tricky vocab (I’ve underlined some of the potentially more challenging  words below – but much of this will vary from class to class, and L1 to L1). Also, encourage them to be as precise as possible in their comparisons, depending on the data that they have.

9. Ask the class to discuss, in pairs or groups of three, whether or not they would accept either one of the proposals, and to justify their decision. Take some ideas after a few minutes. Do they accept the connection between maps and social equality?

10. Tell the students that a teacher called Neil McMillan discovered that you can make transcripts of Youtube videos, and that this might help improve their listening skills. [Well, I doubt very much I was the first, but I discovered it in my own way. Click on the captions button at the bottom of any clip to generate the subtitles. Then click on the ‘Interactive Transcript’ button to the right of the flag below the video to reveal the entire script. Copy, paste it into Word, and start editing it to suit your purposes.]

Anyway, the problem is, of course, that Youtube isn’t (yet) very good at transcribing the subtitles. In fact, it made a number of inexplicable errors. Can the students figure out what the problems are? Hand them the script below and get them to start underlining and discussing what’s wrong.

View this document on Scribd

11. Once the students have done this, play the clip back one last time (perhaps muting the screen to focus them on the audio only) to check their ideas. Pause after each error to confirm what it should be (answers are in the second part of the document above).

There may be parts that students have corrected unnecessarily. ‘Sorry to be late’ may be seen as a US English version of ‘Sorry I’m late’ or ‘Sorry for being late’.  ‘Course’ has no ‘of’ to introduce it – this strikes me as a pretty common example of ellipsis. And ‘merry men’ is not an error, but rather a humorous reference to Robin Hood. Aside from these, you might want to point out that Dr Fallow’s responses to introductions (‘Course you are’ and ‘Indeed you are’) are perhaps not the most high frequency phrases used in such a situation.

12. Now ask the students to consider why the errors were made. What listening difficulties does the caption creator have? Discuss the first example below to demonstrate. Direct them to consider the other examples below if they  struggle to come up with more ideas.

*Weak, unstressed grammatical words like articles or prepositions are misheard or not heard at all

*Rapidly spoken connected speech is misheard, but sometimes some of the rhythm of the speech is captured (Aggressiveness > I wanna see this; Give me two parks and stuff > Give me 200 bucks and it’s done; to crossing oceans > to cross an ocean)

13. Drill the last two examples above. Highlight the forms of connected speech by backchaining, e.g.:

Highlight on the board how, just like ‘want to’ becomes ‘wanna’, ‘Give me’ can become ‘gimme’ in informal written English.

14. Get the Ss to read through the corrected dialogue in pairs or groups (Ss can jump between roles, or simplify multiple roles into one, if there are not enough in each group to cover all the parts). Listen out for, and feed back on, how natural their pronunciation was, with a particular focus on connected speech.

15. Finally, get the Ss to improvise the dialogue without the aid of the tapescript. Feedback again on any errors or pronunciation points they might need more focus on.